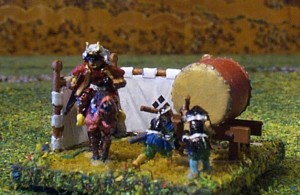 Samurai, Wako, and their Enemies

With my exotic theme “Samurai” I am specializing in the Sengoku Jidai period, the era of the Warring States, leading to the unification of Japan. I’m interested in doing the three unifier Oda Nobunaga, Toyotomi Hideyoshi and Tokugawa Ieyashu and their armies.

Back in 1999, I have the Volley & Bayonet modified by a master of wargaming Frank Chadwick for my samurai armies in 15mm. My adoption can be found here:

The typical opponents of samurai armies were other samurai armies. My new collection of 28mm Samurai should contai other allies and enemies too, see here: