To simulate battles between Samurai Armies, in 1999 I adopted the American Tabletop System Volley & Bayonet for this period.This is an unoffical, private adoption of these rules.

This adoption covers a very exotic period and campaign: The battles of the Japanese Samurai armies in the Sengoku Jidai , the Age of the Country at War (about 1550-1615). This seems to be very far away from the period V&B normally covers (about 1700-1900), but there a some similarities: The battles are rather large, as they are not common in Europe not before the era covered by V&B: from 35.000 (Shizugatake) to some 190.000 (Siege of Osaka) men involved and one of the daimyos (warlords) Toyotomi Hideyoshi is called “the Japanese Napoleon”.

But there are differences too: Samurai armies are not divided in comparable military divisions and corps, but build from many greater and smaller clans with many differences in size and composition: One clan may perhaps have a daimyo (feudal lord, warlord of a clan) and some hundreds men , the next a daimyo with personal household troops and many less important clans with their daimyo incorporated in the higher daimyo`s army. Even in one clan the soldiers are very differently armed and you have surely many units only fighting close combat.

Although there are no classic units in Samurai armies you can distinguish the following types of troops:

Toyotomi Hideyoshi – 15mm Command base painted by me

Daimyo commands one clan. This clan may be composed of units only or of other daimyo and there clans besides the own household units too. All daimyo can rally subordinated units  and attach themselves to subordinated troops, giving them Moral +1, but may then be killed like army commanders. Great clans may have taisho (generals), commanding only a part of the troops of a daimyo. These taisho can give only command to subordinated units, but cannot rally  units or be attached to give then moral. (V&b Values: Daimyo are mounted on (V&B) corps commander stand,   taisho on division commander stands)

Knightly armoured cavalry with different weapons, mostly Yari. Most horsemen have 2 or more foot retainers (foot Samurai or Ashigaru) supporting them, therefore in fact it is a mixed cavalry/foot unit. To represent this, these units counts as heavy cavalry for combat. They only move like heavy cavalry when attacking that turn, but otherwise move as Infantry. (V&B Values: mounted on V&B brigade stands. Only melee. Moral 6-7)

This is the typical troop of a Clan: Knightly infantry in armour with ashigaru as support troops, in fact a mixed armoured samurai/ashigaru troop with different weapons but mainly Yari (spears). (V&B Values: Brigade stands. Only melee. Moral 5-6) 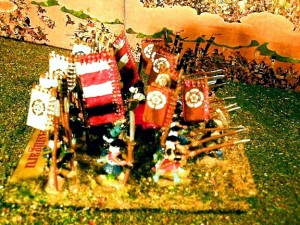 Ashigaru of the Oda Clan

Ashigaru arquebus Corps, armoured, commanded by samurai. Teppo were used in two different formations: a.) Teppo Skirmishers: Mostly teppo were brought in action as skirmishers before the Samurai infantry and Yari wearing Ashigaru, often combined   with yumi (bow carrying troops- see below under “Yumi)” in one skirmisher unit called “Teppo/Yumi” (this is only a advice for figures on stand, make no differences). If the enemy -especially cavalry- attacks , they run behind the formed infantry (V&B Values: Skirmisher stand. Fire and melee. Moral 5) b)Teppo Line Regiment Teppo were lesser used as a kind of formed line regiment similiar to those in 7-Years-Wars. Mostly covered by works, they shot (about 100 years before European armies did) a simple salvo fire (and therefore get the same hit dice as V&B Infantry regiments). The most famous case where the line formation was used  had been the Battle of Nagashino 1575. (V&B Values: Regiment stands. Fire and melee. Moral usually 5)

The third ashigaru corps used were armoured Bowmen (yumi). Range as normal teppo.  Sometimes combined with teppo in one skirmisher unit (this is only a advice for figures on stand, make no differences).   Purely yumi units  may be sharpshooters.   (V&B Values: Skirmisher stand. Fire and melee. Moral 5) Remarks: Is a samurai yumi unit (at this era seldom used) necessary, these were always purely bowmen. (V&B Values: Skirmisher stand. Fire and melee. Sharpshooters possible. Moral 6) )

Cannon, seldom used in open battles. Mostly only 1 unit with 1 strengthpoint (representing 4-6 pieces), may only fire if stationary. (V&B Values:Because thre are no normed artillery at this period, values for artillery, if any, are defined in the szenario rules)

There are several Monks armies. But they are similiar organized as other armies: Mounted and non-mounted Samurai monks. Ashigaru-like Spearmen, Teppo, Yumi in appropriate armour, often supported by Peasants and Ronin. Therefore you can build Monk armies as usual. Monks of the fanatical Ikko-Ikki sect might have moral: 7, even if they are only Ashigaru, otherwise as normal.

I have only one report from Ninja military units (at Osaka 1615), but it is a very nice skirmisher stand. No armour, several arms. Ninja use several long-range weapons: Black powder weapons, light bows, Shuriken, blow-pipes, therefore I gave them a fire ability of 100 meters.(V&B Values: Skirmisher stand. Fire 1-inch and melee. Moral: 6)

Former Samurai without daimyo, sometimes hired as mercenaries for several battles or campaigns. Mostly distributed on other units. If used as seperate unit: partially armoured, different weapons. (V&B Values: Brigade stands. Only melee. Moral may be quite different 4 to 6)

All Infantry units without regards of their stands moves with 12″ (Battle Columns movement is not developed now). Cavalry see upwards. All Infantry units are poorly trained regulars, peasants militia. If not otherwise written, all units fight with normal dice.

For getting promotion because of heroic deed in battle, Samurai tend to close to the enemy even without order. To represent this Samurai cavalry must make breakthrough, cannot withdraw to get saving throws and Samurai cavalry and Samurai foot must occupy enemy vacated ground, if possible. (Because it is the time, when Ashigaru became the more disciplined, professional units, these rules don´t apply to Ashigaru Units).

Some Samurai cavalry or infantry and Ikko-Ikki might be shock troops (+1 on every melee dice), Yumi sharpshooters (every dice +1, only if firing). Non-armoured or partially armoured units get hits with +1.