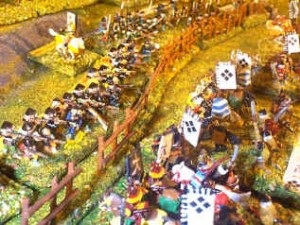 Teppo firing with arquebuses through palisades at the battle of Nagashino. 15mm figures of my collection

If you take in hand the simulation of samurai battles between 1550 – 1615, the battle of Nagashino falls immediately in the eye. It is the collision of two differently military concepts. On one side the Takeda Clan with a classical oldstyle samurai army with a heavy cavalry on top followed by foot soldiers;. On the other side the allied Oda and Tokugawa clans with an army of new style: These daimyo, poorer then the Takeda, complete their small numbers of mounted and foot samurai by strong Ashigaru units and therefore put in field larger armies than the substantial richer Takeda. In the actual battle 13,000 of altogether 15,000 men on the side of the Takeda oppose about 25,000 men of 38,000 under command of Oda and Tokugawa.

This plan failed because Oda Nobunaga having the supreme command used a three-way tactic exactly opposing the Takeda plans . First he pursuited an almost modern utilization of area. It opposed the Takeda in a place, where Takeda´s troops must advance over several hills and one – seeped although by the dry summer to a rill – river to attack, whereby the attack speed was substantially lowered. Nevertheless the cavalry would had presumably overrunned the foottroops, if he had not protected these secondly by a field fortification ,an over 2 km long bamboo palisade set up behind this river. Thirdly he arranged 3000 Teppo (arkebuse armed musketeers) in three lines each with 1000 men behind this palisade alternately firing and loading and therefore maintaining a continuing salvo fire on the aggressors. New researchs showed that he had not invented this salvo fire but took it over from monk troops fighting against him. Using musketiers as the most important part of his army Oda might be European tactics about approx. 100 years ahead.

People seeing the celebrated film Kagamusha might know this battle so far. But perhaps they don´t know that on left and right end of the palisade Oda troops were set up before the defense, which the Takeda first attacked. Oda Nobunaga risked the destruction of these troop units, as it occurred, but therefore almost all troops of its opponent were forced in front of the palisade and in front of the arkebuses of his teppo. In their salvofire several attack waves of the Takeda were stopped. Again differently as in the film when the troops of the Takeda were sufficiently shaken, Odas Yari (spears) carrying ashigaru and his samurai counterattacked carrying out the almost complete destruction of the Takeda army. With small own losses two thirds of the Takeda army, i.e.approx. 10,000 men were killed. The Takeda had been switched off by this battle as a substantial power in Japan, Oda was established after this battle as the strongest power factor in the country.

Oda/Tokugawa win if at gameend they have broken every recognable rwesistance That´s the case if the moral of all clans of Takeda collapsed while Oda/Nobunaga stil have at least 3 clans without collapsed moral.

Takeda wins if at gameend they had substantially broken through the fieldfortication of Oda/Tokugawa and therefore can advance in the enemy provinces after the battle). This is the case if at least 5 unrouted Takeda units wothout collapsed moral are west of the fieldfortification (and a line thougt from both ends of the fortificaation to the north aus south edge of the bettlefield).

If nobody fulfil the victory conditons and neither there is a gamemaster to decide who wins nor the players agree who is winning game ends with a draw.

Historical notes: Oda Nabutada with 4000 men reserve not in battle

Historical notes: Sakai Tadatsugu´s 3000 men -out of board- attack Takedas Camp  outside the battlefield